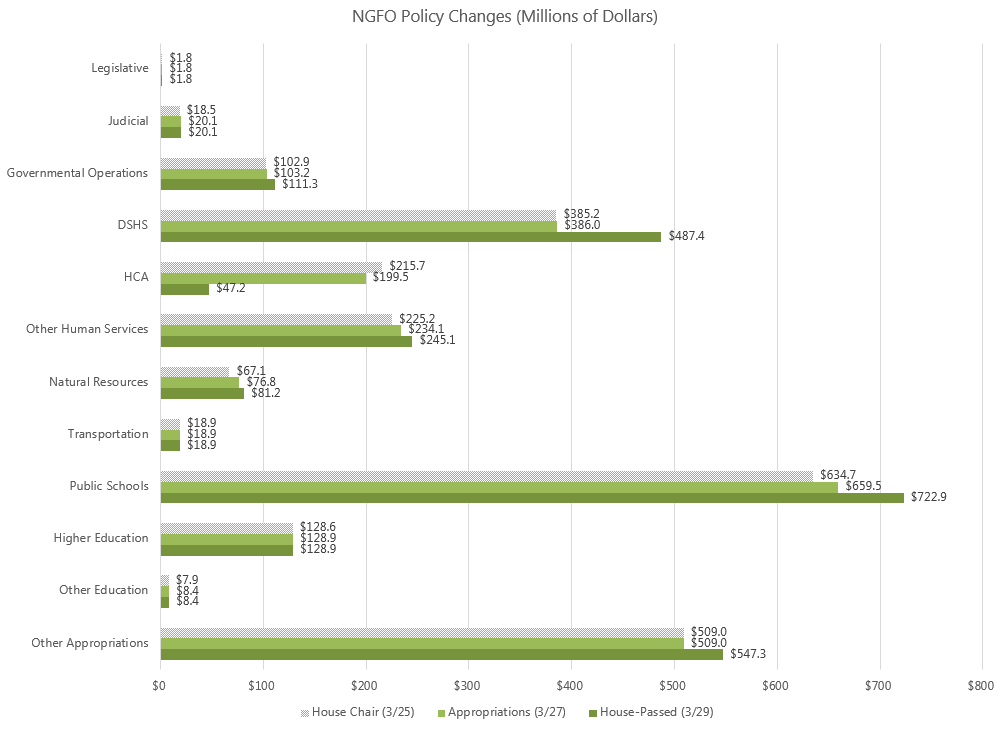 Friday night, the House passed a 2019–21 operating budget that would appropriate $52.934 billion from funds subject to the outlook (NGFO). (That doesn’t include the $389.6 million outside of the NGFO that would be spent on higher education and career connected learning.) In a policy brief last week, we wrote about the budget as proposed by the House Appropriations Chair. Since then, amendments by the Appropriations Committee added $48.9 million to the total and floor amendments on Friday added another $74.4 million.

Altogether, the House-passed budget would increase spending on new policy by $2.421 billion over enacted 2017–19 appropriations, in addition to maintenance level (the cost of continuing current services) changes of $5.853 billion.

The chart shows how the NGFO policy items have changed at each step. Among the floor amendments:

Additionally, $58.4 million would be provided for hold harmless payments to school districts, contingent on the transfer of extraordinary revenue growth from the budget stabilization account (BSA, or the rainy day fund). HB 2163, introduced today, would transfer $58.4 million from the BSA to the general fund–state (GFS) in 2017–19.

Previously, the Legislature had directed that $1.078 billion in extraordinary revenue growth (EORG) in 2017–19 would be transferred back to the GFS. (We documented this in our brief on budget sustainability earlier this year.) Since then, the estimate for EORG in the biennium has increased to $1.760 billion. If HB 2163 is enacted, just $624 million of the biennium’s EORG would remain in the BSA.